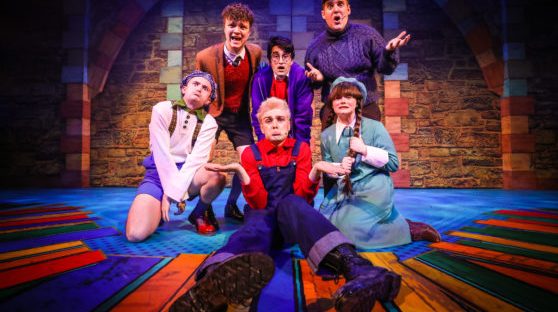 “ Calls to the Childhood in us all!“

Having already had “The Broons” live on stage, now respected producing house Dundee Rep collaborate with Selladoor Productions to bring Scotland’s favourite scamp “Oor Wullie” to life on stage in a brand-new production and what a special and charming treat it is.

With a book and lyrics by Scott Gilmour and music by Claire Mackenzie this musical adaptation brings the stories to life that have enchanted readers for over 80 years in The Sunday Post and not to mention the yearly Annuals that have been a part of the Scottish Cultural landscape for generations.

The Story of this show is a touching, and moral tale of Understanding each other and the world around us and holds a mirror up to the modern world. Wahid (Eklovey Kashyap) as Scottish boy of Pakistani heritage is bullied at schools and finds the only way to survive is to immerse himself in the adventures of “Oor Wullie” in an annual handed to him by the librarian, But Wullie (a brilliantly created take by Martin Quinn) has big problems the evil Basher Mackenzie (Leanne Traynor) has stolen his bucket and threatens to take over his story. Can Wullie and his pals Bob (Dan Buckley), Soapy Soutar (Bailey Newsome), Wee Eck ( Grant McIntyre) and Primrose Patterson (Leah Byrne) along with Wahid find the bucket and see the best in Basher? Well with a little from PC Murdoch (Ann Louise Ross) this charming and family friendly story unfolds, with songs that are catchy and with a heavy Scottish flavour and comedy at his core it’s a truly charming mix. Special mention must go to “Wullie’s Wagon” a song which has a real touch of the Chitty Chitty Bang Bang’s about it.

Director Andrew Paton has delivered what must have seemed impossible, in bringing a corner stone of Scottish literature to life and making it accessible to a modern audience of all ages It was no mean challenge but he succeeds thanks to the 11 strong ensemble company who work cohesively to not only bring to life the central characters but also the many other characters who populate the show.

Kenneth MacLeod’s design is functional blending both comic book with life like locations although there were some problems with the sliding screens on opening night, there were also a couple of pauses which lingeried just a bit too long but was probably down to open night niggles and will ease as it settles into the run. There were also problems in Katherine Williams lighting design, to often the performers weren’t in light and random spotlights appeared to light up areas of the stage not being used, again maybe just an opening night faux pas.

Overall though, this is a warm hearted and winning production that truly calls to the childhood in us all, its inherently Scottish and shows home grown musical theatre at its best. The niggles will soon settle and audiences are assured an evening of musical theatre that will conjure memories as well as where we all are in the world today, this is never more true than when the show pays tribute to Oor Wullie’s creator Dudley D Watkins.

So pop along to the kings for a Braw Nicht oot!