Hard to believe the curtain call for 2019 is in sight, with Christmas light switch on’s happening across the country, Christmas shopping stepping in high gear and party season knocking on the door. For audiences of the arts attention turns to the many theatrical treats that are on offer in our theatres and venues. While the traditional Pantomime is the biggest choice there are some musical jewels too. So lets look around the country at the biggest and best on offer. 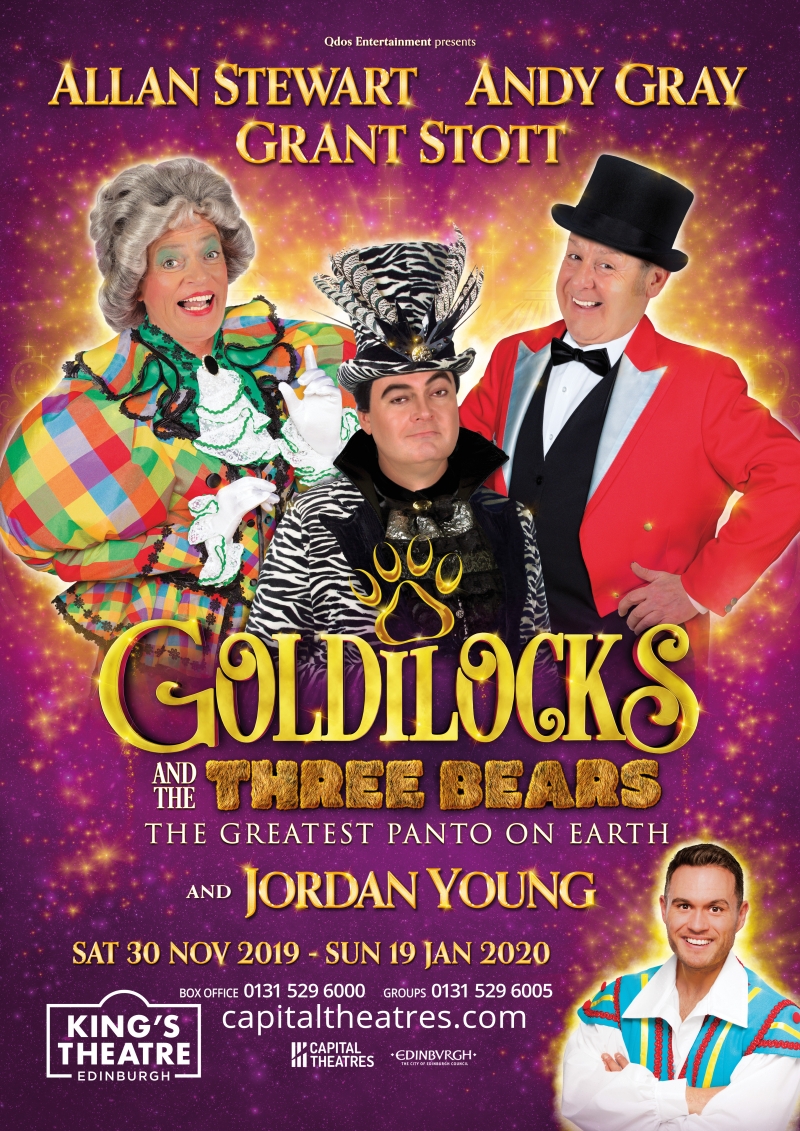 12 years after its last appearance on the King’s stage, Goldilocks and the Three Bears returns as the pantomime of choice for what ranks as Scotland’s number 1 pantomime. Allan Stewart returns as Dame, Grant Stott is still the baddie and in what will be a truly emotional Moment, the legendary pantomime performer Andy Gray for fills his promise that after missing last years beauty and the beast as he battled cancer he returns as the Ringmaster. Another big wow factor is Jordan Young the star of Aberdeen’s His Majesty’s Pantomimes makes his Kings theatre debut as joey the clown. This is a show that will mix circus, panto, costumes, music, comedy, stunts and magic for a special production! 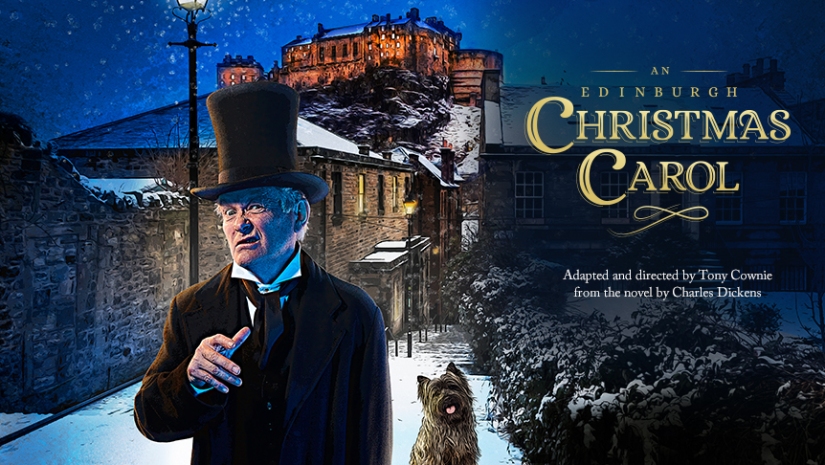 The Lyceum is beloved and respected for its Christmas tales, a unique hybrid of theatre making fusing together both play, children focused theatre and a heavy dose of Christmas magic. Edinburgh folklore tells us that when Charles Dickens was visiting the city on a reading tour, a stroll through a kirkyard brought him to the tombstone of one Ebenezer Scroggie, inspiration struck, and A Christmas Carol was born. Writer and director Tony Cownie (The Venetian Twins, The Belle’s Stratagem) brings this famous festive story back to the city of its birth with a guest appearance from Edinburgh’s best Loved Victorian – Greyfriars Bobby!

The Edinburgh playhouse, Scotland’s home of the west end mega shows and this Year welcomes the smash hit Disney spectacular for a second run at the greenside venue and this time its staying for a 4-month mega run. Set against the majesty of the Serengeti Plains and to the evocative rhythms of Africa, Disney’s multi award-winning musical is a unique theatrical experience that you will remember forever. The lion king is true magical treat for all the family and show both Disney and the art of theatre making at its very best. This will be the shows only performances in Scotland on the current tour so it well worth heading to Edinburgh for an unforgettable night out. 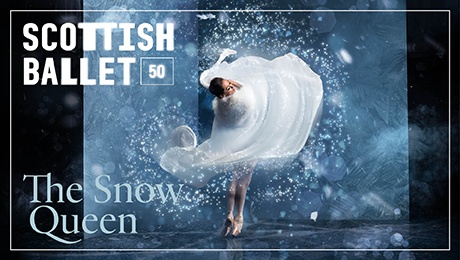 Christmas tradition at the Festival Theatre is all about Scottish Ballet, and there 50th anniversary year comes to a spectacular close with the world premiere of The Snow Queen. This glittering new production is inspired by Hans Christian Andersen’s much-loved tale.

It will be set to the music of Rimsky-Korsakov, performed live by the full Scottish Ballet Orchestra. From the bustle of a winter’s market to the shivers of a fairy-tale forest, take a journey to the Snow Queen’s palace, where you’ll find her surrounded by the icy fragments of an enchanted mirror. Along the way you’ll meet a colourful cast of characters, from young lovers parted by a spell to a circus ringmaster with a few tricks up his sleeve. Choreographed by Christopher Hampson and designed by the award-winning Lez Brotherston, this story of love and friendship is sure to delight the whole family.

The 2018 creative team return to the Brunton for this years family focused pantomime, Cinderella but not as you remember it, Cinderella is off to the circus, promising laughter, fun, music, and a few surprises with a stellar cast, one thing is for sure the Brunton will do its best to charm the audience of the Sea Side town with there take on a pantomime classic.

Imagine Pantomimes returns to Falkirk for a second year with the famous tale of old Peeking. With a law decreeing that the princess can only marry a prince, and the evil Abanazar up to no good, it looks as though Aladdin’s dreams may never come true. And he’s not the only one! Aladdin’s mum Widow Twankey, has got the mixed-up Chinese laundry blues which are not helped by the fact they’re also very poor…If only Aladdin could make his fortune and then all their dreams could come true. FTH Theatre once again promise a show packed full of spectacular scenery, breath-taking costumes, stunning special effects, fabulous song and dance routines and hilarious slap stick comedy. 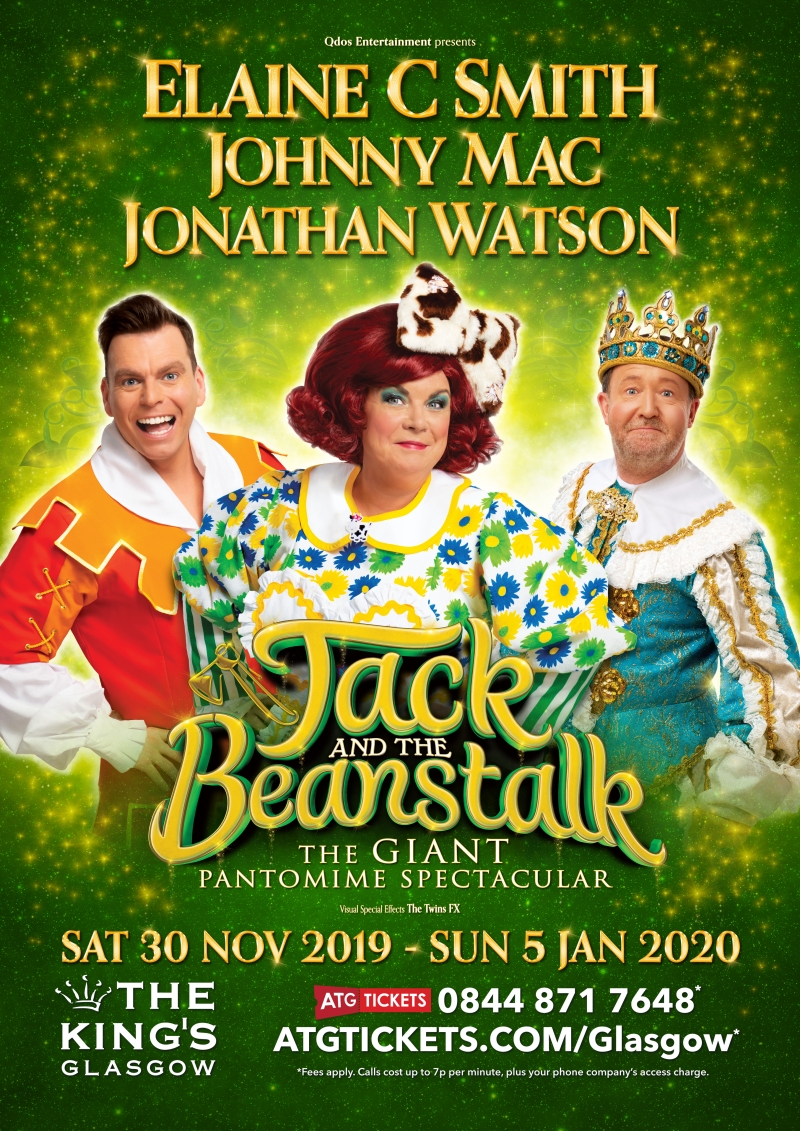 Fee-Fi-Fo-Fum… I smell a brand-new pantomime! For the first time in over 30 years, a mighty beanstalk will burst out of Bath Street as Jack and the Beanstalk returns to the King’s. Fresh from their trip to Old Peking, Elaine C Smith and Johnny Mac return, swapping their magic carpet for Dame Trot’s farm to follow Jack and his family and climb a beanstalk of gigantic proportions to Cloudland in another unmissable family show. Doomed to sell his trusty coo, join Jack as he fights to save the beautiful Princess, outwit the evil giant and win riches beyond his wildest dreams along with the hand of the girl he loves. Expect laughs, music, special effects, magic beans and bundles of audience participation in this GIANT of a pantomime!

Following the overwhelming success and return to form of last year’s production Cinderella, The Pavilion have decided to take the team on another Panto adventure its been a several years since it was last seen on stage at the Pavilion and it could well be the only theatre in the country to produce “The Magical Adventures of Pinocchio”. Based on the original story but with a Glasgow twist in true Hilarious Pavilion style and you can be confident that it is Good Clean Family Entertainment.

Starring Liam Dolan as the Hilarious Jiminy Cricket, River City’s Stephen Purdon as Pinocchio, Grado as Geppetto,  and more of the Cinderella cast to be announced very soon and a few additional surprises.  With a brand-new Script, Stunning Scenery, Sensational  Costumes and Magical Special Effects that we have become known for, it is sure to be; The Best Panto in Town! 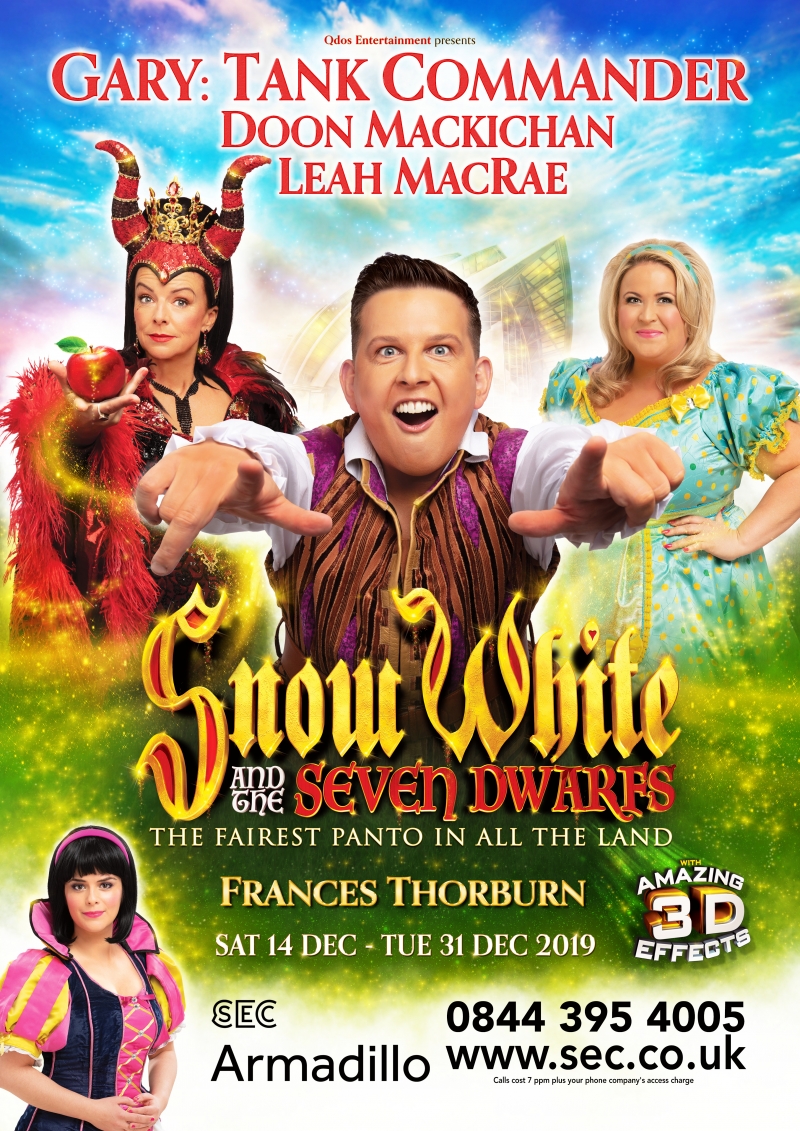 The SEC Armadillo will be serving up plenty of cheesy pasta this Christmas as the venue have announced Gary: Tank Commander will be back and leading the cast of this year’s spectacular pantomime Snow White and the Seven Dwarfs to victory. Joining him will be Two Doors Down comedian and actress Doon Mackichan, with Leah MacRae and Frances Thorburn.

Snow White and the Seven Dwarfs will be lavishly brought to life in a production packed full of magical mirrors, seven friendly dwarfs, an abundance of comedy, sensational song and dance and jaw-dropping 3D special effects, for which the annual SEC pantomime is so well known and loved.

We Will Rock You the Musical, Theatre Royal Glasgow

The worldwide smash hit musical by Queen and Ben Elton returns to Glasgow. The multi-million-pound show dazzles all the senses in breath-taking style. Guaranteed to blow your mind, this musical phenomenon is not to be missed! Since 2002 over 16 million theatre goers in 19 countries have thrilled to this awe-inspiring production. With 24 of Queen’s biggest hits delivered in a show that boasts the scale and spectacle that marked the bands’ legendary live performances. 24 of Queen’s greatest hits, including Radio Ga Ga, Killer Queen, Bohemian Rhapsody and, of course, We Will Rock You!

We Will Rock You! The Musical, Theatre Royal Glasgow, Mon 9th Dec – Sat 28th Dec for tickets go to: https://www.atgtickets.com/shows/we-will-rock-you/theatre-royal-glasgow/ 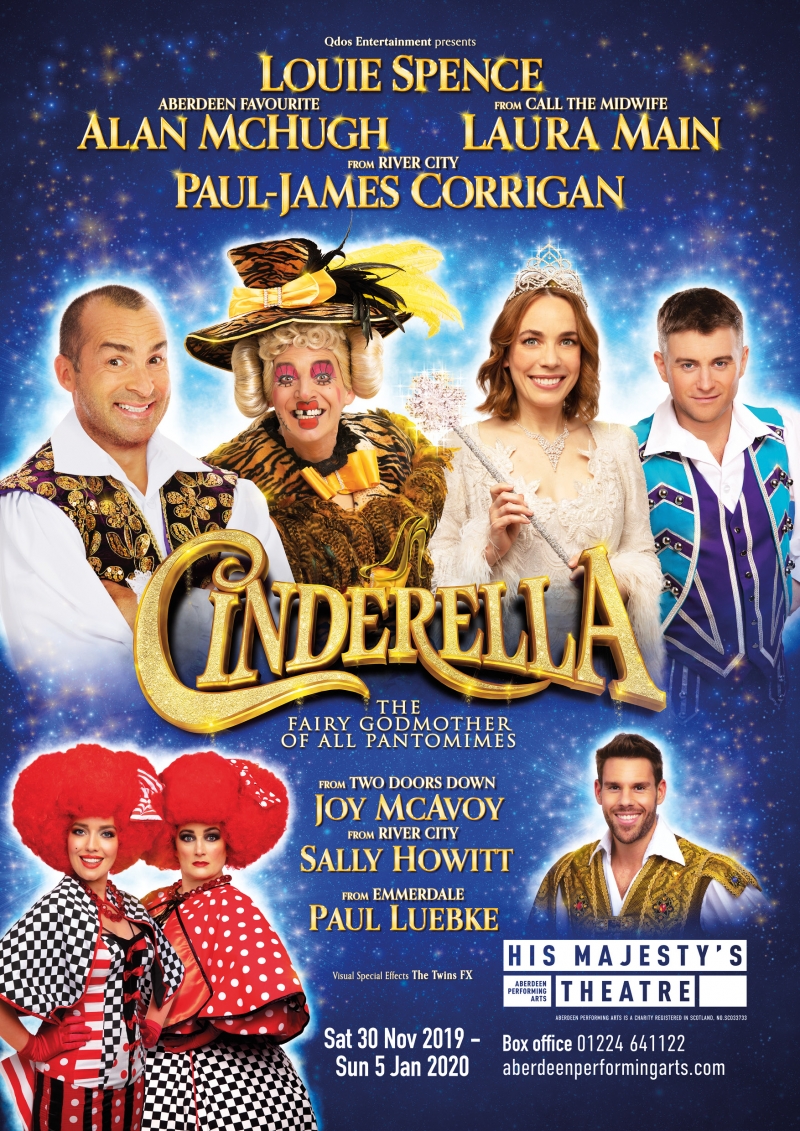 HMT audiences shall go to the ball as Cinderella transforms from rags to riches, outwits her Wicked Stepsisters and with the help of her hilarious friend Buttons and her Fairy Godmother, wins the heart of the dashing Prince Charming. Cinderella will feature all of the ingredients of the perfect pantomime; a fabulous cast and orchestra, laugh-out-loud comedy, stunning scenery and special effects, beautiful costumes and plenty of boos and hisses for all the family to enjoy. Cinderella will once again be produced by Qdos Entertainment, the world’s biggest pantomime producer and the team behind the annual must-see HMT pantomime.

The clock is ticking! Don’t miss your chance to see Cinderella, the Fairy Godmother of all pantomimes. 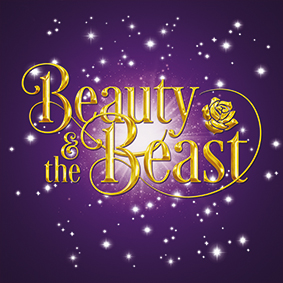 Finally, the most northerly major production and indeed the biggest panto in the Highlands. Eden Court are planning another spectacular show this year with This year’s ‘beauty’ of a pantomime at Eden Court is Beauty and the Beast. A conceited Prince gets cursed and spends 500 years trapped in a castle as a Beast. The arrival of a beautiful, intelligent and feisty young woman offers the possibility of the curse being lifted, but she can learn to see beyond appearances and learn to love a Beast?

So, there we have it our pick of the best of Scotland’s Pantomimes and Christmas offerings, but don’t forget to check out your local pantomime or show there are performances taking place the length and breadth of the country there really is something for everyone to choose from. We here at Scotsgay arts will be reviewing a selection of shows so keep checking back in the run up to Christmas and beyond into the new year.