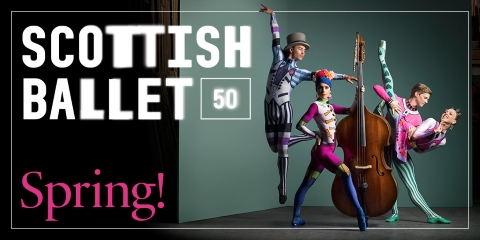 A delicious double-bill of witty, inventive and delightful dance: a fitting beginning to the celebrations for Scottish Ballet’s 50th year.  As current artistic director and CEO, Christopher Hampson, reminded us, Scottish Ballet was founded to perform new works alongside classics, and tonight’s programme was a perfect example of this – Sophie Laplane’s new work Dextera was coupled with a ballet composed in 1974 which rapidly became a classic – Sir Kenneth MacMillan’s Elite Syncopations which used the then in-vogue music of Scott Joplin, which many of you will remember was used for the soundtrack of The Sting, the classic movie starring Paul Newman and Robert Redford.

Dextera used music by Mozart – in itself a delight, played in the pit by the wonderful Scottish Opera orchestra.  Movements from his vibrant, tense 25th symphony [remember Amadeus?] and his final violin concerto, the Queen of the Night’s spine-chilling vengeance aria from Magic Flute and Cherubino’s moving plea voi, che sapete from The Marriage of Figaro providing a wide-ranging emotional spectrum for the dancers interpret against a fascinating mixture of timbres, textures, and orchestral colour.

The music began: the tabs went up on a dark, empty stage.  A single spotlight made a circle of light into which a blood-red glove fluttered down… a young man moved into the circle of light, picked up the glove – and this shockingly scarlet hand seemed to have a life of its own, moving and pulling him in every conceivable direction… More people, more gloves… Hands waving, gesturing, threatening, cajoling: gloves being stolen, sought, discarded, treasured… Cream-clad mannequins manipulated by red-gloved puppeteers; extraordinary lifts and portages using handles attached to costumes, allowing the ‘puppet-master’ to move his [or her!] ‘doll’ through an indescribably complex set of manoeuvres… Traditional partnering roles were reversed or completely ignored: four men surrounded and manipulated one woman; girls turned the tables on their manipulators…

Dextera is a fascinating, ever-changing visual kaleidoscope through which to investigate gender roles, power and powerlessness, and the processes of artistic creation.  Subtle lighting and simple muted mostly monochrome costumes made the blood-red gloves even more startling and symbolic.  The movements were sinuous, angular, extraordinarily complex and jaw-droppingly clever – Sophie Laplane is a name to look out for.  The audience erupted into a storm of cheers and applause – this is a ballet to seek out and watch again and again.

As if that weren’t enough joy for one evening, we were then treated to the joyful celebration of dance and the human body that is Elite Syncopations with its feel of 1920s dance halls and competitions.  The band came up to join the dancers, who stayed on stage the whole time, watching each other and indulging in all sorts of byplay.  All the musicians were superb, but Brian Prentice deserves special mention for his magnificent, magnetic, stylistically authentic piano-playing.

Boys showed off, girls flirted: a hapless wee bespectacled man [a brilliant Andrew Peasgood] was hilariously partnered with a much taller woman, surviving various attempts to brain or decapitate him, their whole dance being exquisitely funny and technically amazing.  Bethany Kingsley-Garner and Sophie Martin sparkled in their solos, and I loved the goofily-grinning, ever-so-slightly shy and awkward Constance Devernay – but every single dancer shone in their turn in the spotlight, and looked utterly gorgeous in their elaborately-painted skin-tight bodysuits!

Elite Syncopations was greeted with another storm of cheering and applause from a deeply appreciative audience.  This double bill was the perfect illustration of the excellence we now come to expect from Scottish Ballet: I’m really looking forward to their next première – The Crucible – which will be performed in the Edinburgh International Festival before going to Glasgow, Aberdeen and Inverness in the autumn.  Don’t miss it!