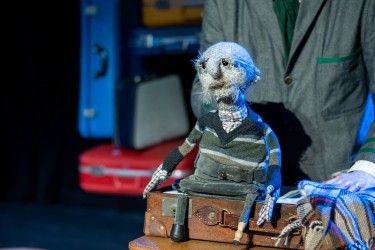 Against a gigantic pile of suitcases, trunks and hatboxes Guy Hargreaves sings, dances, does magic and keeps a young audience [generally aged 3-7] completely silent for 45 minutes as he tells us about his ‘best job in the world’ – helping people.  “Who will we help today?” he sings: it’s Ted, who lives in Ted Street in The Busy Town, and off we go to find him…

Ted, a grey-clad and wispy-haired old man, lives alone and spends his time watching the world outside his window or staring at the television with no-one beside him on the sofa.  This splendid Shona Reppe puppet touches our hearts as we watch his lonely existence and pity his frustration at the noise his party-loving neighbours make as he’s preparing to go to bed.  A little bit of magic from Guy and we learn that Ted dreams of having a party – but there’s no-one on his guest list: he has no friends to invite.

This is where Guy and his sidekick Sylvie [a glitter-spangled feather who dances as she warbles her song] realise that their help is needed to get Ted to go outside into the world and meet people.  The button that had come off Guy’s jacket becomes a seed which is planted and, with the help of some delightful magic, becomes a plant which Ted is astonished to find beside his bed in the morning.  It grows slowly and becomes Ted’s constant companion – but one day it droops and wilts: surely it’s not dying?  Ted must take the plant outside into the fresh air and sunshine – but can he bring himself to leave his house…?

It’s very hard, but Ted does it – and suddenly comes to life.  He finds adventure – flying at the end of a kite string, climbing a hill to enjoy the view, and building a snowman to share with nearby children.  The plant recovers, and continues to grow, becoming a small tree: when Ted finally returns home he finds it’s now too big to take back inside the house.  At first Ted is very sad, but when he discovers that people come every day to watch the tree growing he makes more and more friends: he invites them all to a splendidly glittering party at which his noisy neighbours, who are now good friends, provide the music.  Ted’s party means Guy’s job is done – and he reflects joyfully that his is indeed the best job in the world.

This is a delightful show with an engaging and inventive soundtrack and a superbly imagined and constructed set which transforms into the different rooms of Ted’s house and the landscape outside into which he ventures, finally becoming the tree, now huge, through which Ted has made so many friends. Guy is a very versatile and talented actor who constantly engages with his young audience and keeps them enthralled.  With the help of Sylvie he is able to explain to the youngsters that what might seem unkind – letting the wee plant wilt – or sad – Ted having to leave his plant friend outside because it will no longer fit through his front door – are all part of the PLAN to help Ted: and we see that he is right – Ted’s life is completely transformed, all from the little gift of a seed.

I found this gentle show a joy to watch, and the audience loved it.   Little Gift is in Edinburgh as part of a wide-ranging tour – you can catch it when it tours to Livingston, Inverness, Paisley and Giffnock.